Play Rise of Kingdoms on PC


In the gaming trends the Rise of Kingdoms is a game which gets lot of success in less time due to its unique strategy, graphics and addicting features. Most of the gamer all over the world truly enjoyed and engaged with this game.

BlueStacks will give you easy to use, smooth and rich user experience using its unique features like below: -

1.  Easy to operate: - Like smaller screen, BlueStacks gives you bigger screen with multiple sizes as per your choice. The mouse movements give you full control in the game.

b. Free look: - The games which support free game look, BlueStacks will give you some advanced controls. You need to just drag and drop the free look controls from advanced game controls use it according to your game.

c. Repeated tap: - Are you tired with tapping on screen multiple times in some game senses?, BlueStacks will give you the advanced control for better game experience known as Repeated tap control which let you repeatedly tap in a spot for chosen no of times.


3    High Performance: - Due to the higher FPS BlueStacks gives you the faster and smoother(fluid) gaming, it would be much easier in car racing, shooting games, etc.

5    Real Time Translation: - You able to play your game in your local language, which gives you the awesome feel ever.

6. Streaming: - BlueStacks gives you built-in streaming function, which helps you to stream your game on social media.

Rise of Kingdoms Overview and Mechanics

Now let’s install and play Rise of Kingdoms. After installing you need to login using Facebook or Gmail if you not already logged in to BlueStacks using Gmail. 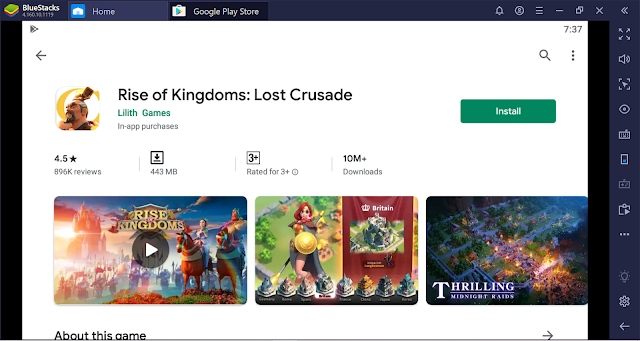 After installing open the game 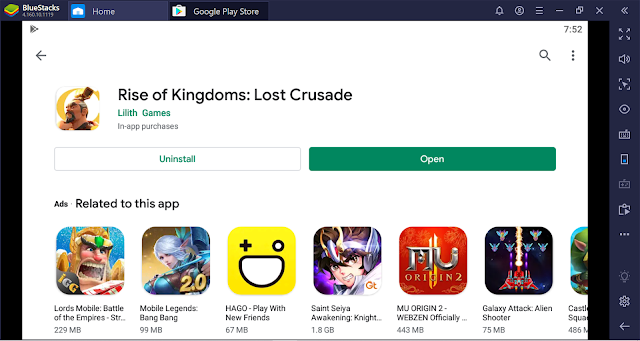 After you are entering into the game, your role gets assigned as a governor. So, as a governor you are responsible to make major decisions because the fate of the people is now in your hand. Rise of Kingdoms will give you the option to pick one of the 11 civilizations at the beginning of the game or able to change it later in below screen. 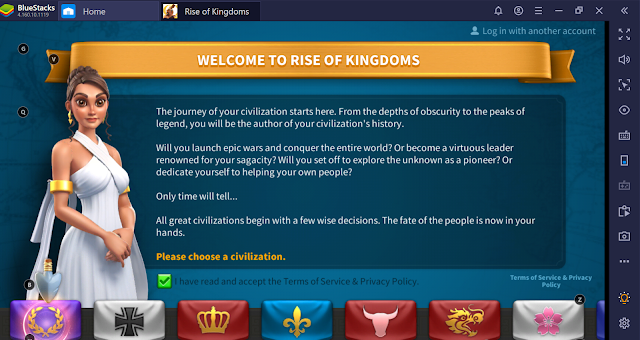 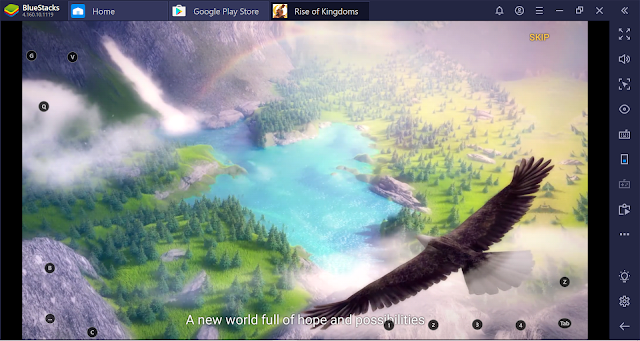 On every stage you will get assistance, you can zoom in or zoom out the screen using up and down keys. 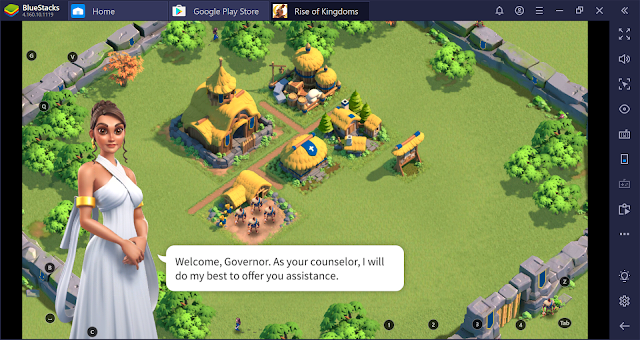 Before digging into the game, you need to know some Rise of Kingdoms strategies and mechanics which contains some set of rules.

There are mainly four types of resources food, stone, wood and gems. Each of them is required for various tasks like stone will be used for building city as well as for military improvements and defense upgrades. Wood also required for creating city buildings.

Gems is a digital currency; you will earn gems after completing some certain tasks and this game allows you to make upgrades which gives you lifeline.

Buildings are divided into three types in Rise of Kingdoms like, Quarries where you grow your umpire. There are economic buildings contains academic, lumber mill, gold mine and storage. There are military buildings which is used for deal with troops. Also, there are aesthetic buildings used to make the appeal of civilization.

For building construction, you will need resources, time and builder.

Play Rise of Kingdoms on PC

In the gaming trends the Rise of Kingdoms is a game which gets lot of success in less time due to its unique strategy, graphics and addic...