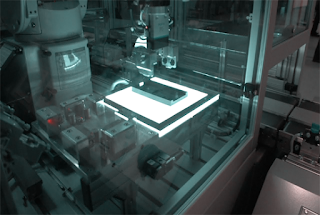 A high tech virtual laboratory was launched yesterday at Queen's University.  The $21.8 million laboratory will help to develop new drugs, to study pollution caused by the combustion of fossil fuels, to develop new materials for artificial hearts and to study command and control for fighting forest fires, among a wealth of applications.

Ontario Energy, Science and Technology Minister Jim Wilson attended the unveiling of the project.  "The economic value of this kind of research cannot be overestimated," said Wilson, whose government contributed $7.3 million of the laboratory's costs.  In an interview, he said Queen's had a demonstrated ability to spearhead the laboratory.

The project's leader is Dr. Andrew Pollard, a mechanical engineering professor at Queen's.  In a statement, he said the laboratory is a significant step forward.

Wilson also announced a further $1/2 million investment by the government for research at Queen's aimed at increasing the success rate of high growth companies.  The government, Queen's School of Business and the Canadian Imperial Bank of Commerce are sharing funding of the project, worth a total of $3.6 million.

Queen's principal William Leggett, who repeatedly heaped praise on the visiting minister for his role in helping secure the funds for Queen's, said it was important to note that it would have been next to impossible for the laboratory to become a reality without partnerships.

The money form Queen's Park will help Queen's and the other schools to recruit faculty members in the computational sciences.  Leggett said this was important for Queen's, noting that the school has lost 80 professorships due to cutbacks in the recent years.  This will help regain ground previously lost, he said.